We have a tradition at our house of coming home that on Halloween, we get everyone home from school, get pizzas, then go trick or treating!  However, this year ended up ittle different than year’s past…

We had a funky cough going through the house, but it was never a full cold or sickness for anyone, just a funky cough…. well, until Shawn seeemed to get sick.  Emma and Vivi already had it for  days, so they were no longer contagious. But poor Shawn got sick and got ssiicckk.  So Wednesday morning I took him to the pediatrician, and it was confirmed, yep…RSV and an ear infection.  He spent the majority of the night in bed with me with a fever and a ratchety cough.  And I was to be prepared for it to get worse, I was told?  Aww, I felt so bad for my poor little man.

So, since I had to take my sick little dude to the pediatrician, Shawn took off work and took Emma and Vivian to school.  I was a bit bummed because I was going to try to see Vivi in her Good Character Parade at school.  But as I was told, Vivi refused to let her teacher put her costume on her anyway.  Ah, my strong willed children, at it again.  We had no problem getting that costume on her at home though, so…?

After getting my Baby Shawn home from the pediatrician, I had a few minutes, and since Shawn was home to pick up Emma and Vivi from school, I desperately wanted to finish my little project for Vivi.  I wanted to make little cards for her to give in exchange for treats, since she is unable to speak.  The benefit to the cards, hopefully, is bifold – it reforces the use of cards in exchange for a preferred item (in this case, candy) and it will hopefully spread the public awareness about autism.  The card reads “Happy Halloween, I have Autism which can make it hard to speak.  Please accept this card as a Thank You for the Treat!” If you are interested in using these cards for your little one, please contact me and I can send you the template!

Since Baby Shawn was sick, he stayed home with me and Jenny, who decided to dress up a little herself in cosplay as Undertale Sans.  Dad took Emma, who dressed up as a very cute bee and Vivi the good fairy to a Trunk of Treat.  Good thing I had backup to help me answer the door at home, I don’t know what I would have done if I was by byself, the whopping two times the door bell rang.

We had pizza that night, but not order out, I got some from the grocery store and baked them in oven.  I actually prefer that over the delivery, as its not nearly as greasy, and you can add a few toppings if you want, and the best reason, its cheaper! 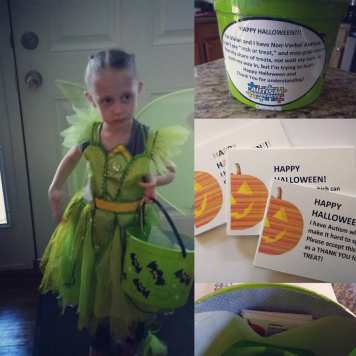 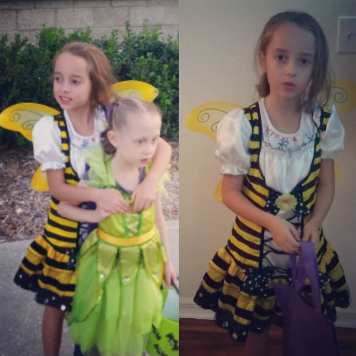 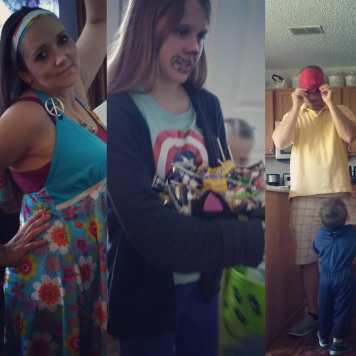 One thought on “Halloween at Our House This Year”